Fair Coin by E C Myers - to toss or not to toss? 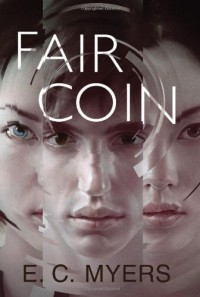 Following on from my recent excursion into the current Nebula crop, my wife asked me to choose some older Nebula winners for her to read.  Our choice was influenced by what was available either from the library or cheap on amazon, so this - the 2012 Andre Norton winner - was what came up.

So far the cover blurb has been pretty accurate - a coin that appears to grant every wish, but with side effects that are less desirable.  So far, the protag, Ephraim, is using his wishes to sort out his mother's broken life, and a variety of he-loves-her-but-she-loves-somebody-else teen relationships.  Hmm.

In that respect the plot is not much different to A Midsummer Night's Dream as Puck manipulates the affections of Demetrius, Lysander, Hermia and Helena.  We have Ephraim, Nathan (boys) but 3 girls (Mary, Shelley and Jena).  So one of the girls is going to be left out in the cold.

Shakespeare puts the moral responsibility for such choices with Oberon, deeming humans not capable of making wise choices.  In Fair Coin, Ephraim is choosing for himself, so his choices reflect a very human selfishness - me first, then my mate; the girls desires don't count much and they are the ones whose affections get manipulated.

So at about the 40% mark Ephraim reaches the danger point - "just one more change to put it all right, and then I'll stop" - where "all right" means "all right for him and for Nathan".

At that point it all changes - there's an infodump which takes the book out of the realm of teenage wish-fulfilment and into something more scientific.  It also resolves some hints laid down earlier and gives us an antagonist for Ephraim and his chosen girl(s) to battle against.

The antagonist is strong and knows what's going on, and is totally ruthless (the body count rises), whereas Ephraim is physically weaker, doesn't yet understand the coin, and is showing a highly moral side.  It's all down to whether Ephraim and his allies can outsmart the villain.

The science wobbles between the plausibility of the theory and the implausible nature of the technology that implements the physics.  In effect the science is cut down for the audience and the technology is simply handwavium with exactly the right properties to let Myers construct his drama.

Which he does very effectively.  The wrap-up is neat, displays Ephraim's moral growth (mostly - his disposition of the antagonist is akin to dropping someone in the middle of a minefield and then claiming you're not responsible) with considerable effort to right wrongs (with some comedy along the way) and balance being somewhat messily restored.  There's no way to undo the death toll, though, and putting Humpty together again involves some hard choices and some tears.

Pro: the novel rises above being a teenage wish-fulfilment fantasy, and tackles the morality of power.  It's a good introduction to aspects of physics, so long as you don't take it too literally.  If you do break Humpty Dumpty, the repair is never going to be perfect - that's life.

Con: the second quarter of the book squanders the early empathy built up with Ephraim, up to the point where he finally realises the selfishness of his actions.  You have to push through that bit to get to the meat of the book.  The technology doesn't match up to the science.

A good read, on balance.