Just one warning, so far... 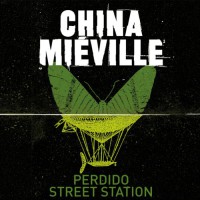 I see a lot of praise directed at China Miéville's works, so I decided to check out whether it was deserved or just hype.  I chose Perdido Street Station on audiobook, narrated by Jonathan Oliver.

Just one warning, so far...

#1 Persevere beyond the Prologue.  I came within a hairsbreadth of a DNF.  The delivery was so intense, so laboured, so self-absorbed, so in love with its own erudition, so over-delivered that it felt like a parody, that I wanted to rip the tape out of the machine and hurl it out of the car and into the stygian night.  Then I remembered it was on my smartphone, that I could just return the audiobook to Audible for a refund, sans histrionics, sans pretentious gesturing.

Then, before I could safely bring the car to a halt and stop this OTT assault on my brain, the prologue ended.

A new chapter began.  It was still excessively descriptive, still somewhat over-delivered, but the intensity had diminished from eleven to about an eight or nine.  And it was going somewhere.  The cast was starting to assemble, and they were interesting people in an unusual city.  I found I could bear the narrator.  I was happy to play the game of understanding New Crobuzon and its rules, its races and its technology.

Now, at about 18 chapters in, I've got to know the characters rather better.  I don't think I'd choose any of them as close friends, necessarily, but I'm happy to root for the ones Miéville wants me to root for.  I'll cheerfully hiss the relevant villains, while noting that they're not motiveless ciphers, and accepting they're complex characters in their own right.

So I'm enjoying the ride.